The facilities can be used for testing engine air intakes, wing components, rotors, propellers etc. under EASA CS25/29 Appendix C and O conditions. If necessary, RTA also designs new test set ups and simulation capabilities together with the customer. Efficient test conditions for engineering or certification is offered throughout the year, independent of the prevalent climatic conditions.

Given the size and high cooling capacity of the IWT provides the only opportunity in the world to test engines of up to 1,5 MW (~2000 HP) at full throttle.

This is particularly significant because the formation of ice has a substantial influence on the performance of the engine and therefore realistic conclusions can only be drawn with an engine in operation. Without the contraction nozzle, the icing cross-section can even be extended to 16 m² at reduced ‘flight’ speeds. This enables icing tests to be carried out on whole helicopters, making the Vienna IWT the biggest of its kind in the world.

Further research work extended the IWT capabilities with a mass flow simulation (see picture on the left) equipment to simulate an adequate mass flow even without the engine what can be very helpful in the design phase.

The force measurement equipment  (see picture on the left) measures the effects of icing on lift and drag forces online under different angle of attack.

A bleed air system is available to simulate the bleed air of an engine for de-icing or anti-icing equipment.

A propeller-rotor test rig (see picture on the left) supports the development and certification of de-icing systems on rotors, propellers or pushers under defined icing conditions. All existing and future development is based on specific customer requests.

Safety is naturally a top priority in the aviation industry. When an aircraft flies through the upper cloud layers, super-cooled water droplets suddenly freeze and in just a few minutes form a centimetre thick layer of ice on critical components such as the engines, rotors, wings and sensors. In order to obtain certification for these components and the aircraft as a whole, manufacturers must demonstrate that sufficient protective measures have been implemented against icing and that the formation of ice will not endanger flight safety in any way.

To develop, test and certify its products, the aviation industry therefore urgently requires high-performance facilities where suitable icing tests can be carried out. Rail Tec Arsenal has taken on this challenge and invested around € 1.15 million in its new icing facility. Thanks to the mobile icing rig, the longest climatic wind tunnel in the world can be converted into the world’s largest icing wind tunnel for aircraft since 2014. Further research and investments in the last decade have gradually expanded the possibilities.

Ongoing research projects as e.g. in the field of natural like snow production (see picture on the left) or rain simulation will continue to extend the climatic and icing tests capabilities also in the future. 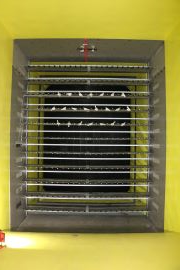 Certification tests involve a simulation of different cloud types from cumulus- and stratus clouds to  freezing drizzle and freezing rain conditions at temperatures between -2°C and -30°C. The  challenges is to ensure the correct ratio of drops in the right size in the air and water droplets remaining liquid at sub-zero temperatures. This ‘cloud formation at sea level’ is achieved using elaborate water treatment, complex air pressure and system control. The mobile icing rig consists of 11 bars and a total of 264 nozzles in different type configuration which is introduced into the large or small climatic wind tunnel for the icing tests. This arrangement enables icing tests to be carried out at speed up to 80 m/s (300 kph) in a cross-section of 8.75 m². Regular calibrations according SAE ARP5905 and EN 17025 using high tech measurement equipment guaranty highest cloud simulation quality.

All information related to aviation is available in English only.

Typical tests in the Icing-Wind-Tunnel;
See contribution in R&D projects;